A Day with Successful Women

A Day with Successful Women

We were able to meet finnCap’s founder and CEO, Sam Smith. Sam is the youngest and only female chief executive of a City broker, she is also a Modern Muse Patron supporting girls everywhere. You can read more about her career on her Muse Profile.

Sam inspired both of us with the message:

“Anyone can do anything if they really want it”.

The exciting event was hosted by the fantastic interviewer Oli Barrett MBE who made the day lively and entertaining for everyone. Oli interviewed prestigious women who are real role models for girls.

Just some of the fantastic women who were interviewed on the day included the renowned Lily’s Kitchen owner Henrietta Morrison, Debbie Bestwick MBE an award-winning games developer who founded Team 17 and Kim Morrish, owner of Ground Control, a company that has forged deals with major retailers such as Tesco.

One of the main themes of the day, besides female empowerment, was how important culture is for a business to thrive. Brenda Trenowden CBE also shared the 30% Club’s ethos explaining the purpose of the club is to encourage gender balance on company boards and within senior management.

What really resonated with us was the overarching fact that there is not just one “silver bullet” as to why we don’t have equality in the industries that are typically dominated by men.

A speaker on the panel said:

“We should make our own rules if the rules that we have are not fair.”

This really inspired us to want to do our best in any situation and opportunity we are given, as well as want to help change society’s views on gender inequality in the workplace.

Aside from hearing from the amazing speakers, we also had the chance to interview three inspiring women.

Their stories helped both of us gain confidence in our future job careers.

Ainsley Melaugh, a Business Development Manager at Yorkshire Building Society told us that she loves her job as she spends most of her time out and about meeting people. Social skills are important in her job (the skills we use to communicate and interact with each other) and she believes girls can start building those skills at school.

Our interview with Ainsley Melaugh, a Business Development Manager at Yorkshire Building Society.

Brigitte Bard who is the Founder and CEO of BioSure, told us that she feels massively privileged to do her job. Her company is doing things that no-one has ever done before and they are helping accelerate an end to HIV – she loves her job. 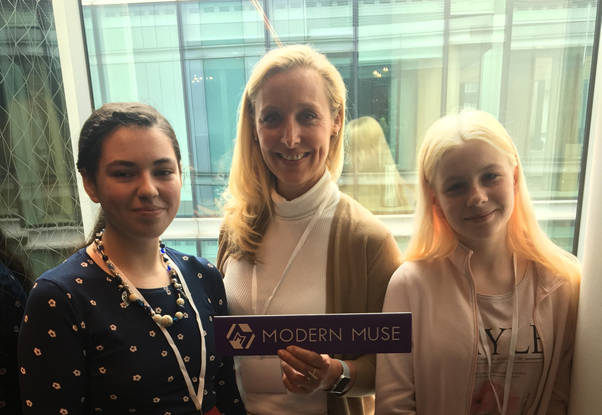 Us with Brigitte Bard the founder and CEO of BioSure.

EJ told us about her varied career and how she became a Managing Director, you can watch the video below to find out about this.

The most important messages of the day were that everyone makes mistakes and even though we may not always feel as though things are fair, there are now things that we can do to change these situations.

It was great to be surrounded by such inspirational and successful women and we left with a sense of empowerment that we will carry into our future careers.